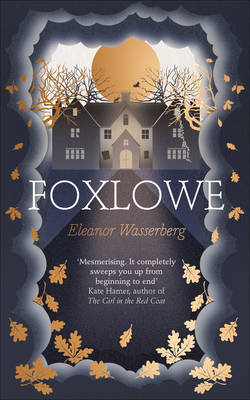 I discovered this book one day in Sainsburys, with time to wait before the bus ride home I flickered through the pages. It got my attention straight away and I bought it later on, I had a good feeling. I usually go for gothic novels, but it was the story itself that drew me in. This is my review for Foxlowe by Eleanor Wassenberg.
Green grew up a commune, she doesn’t know hardly anything about the outside world, Foxlowe and The Family are all she knows. From the very first chapter we are drawn into the darker side of life in Foxlowe, we are told about the ‘Spike Walk’ a line of nails along the wall which they have to draw their arm along as they pass and then turn around at the end and go back down. This is the punishment; it’s also to drive out the Bad, a force which is believed in as strongly as a devout Christian believes in God and the devil. Within Foxlowe this isn’t considered wrong, it’s the norm. From that moment on we are drawn into Green’s life at Fowlowe. The story is compelling and quickly you find you’ve got to the end but not unscathed.
Without spoiling too much of this story, at one point we are taken to the present moment, then back to the story in the past and although you know something is going to happen slowly, slowly you are drawn closer and closer to it but like that door in a horror film the ghoul hides behind, you can’t resist turning the page to find out what happened.
And then the end! I did not see that come although in hindsight it makes a lot of sense.
I would recommend Foxlowe to anyone who doesn’t mind the darker side of fiction; it’s not the darkness of horror stories but the darkness of the human mind and soul. Realism not magic. For those who like a story with impact. This should win awards really, it’s an amazing book.  I loved this book, it had everything that I love and look for: it’s compelling and there are realistic characters you care about/hate. An atmospheric style that’s a pleasure to read.  And the ability to grasp your attention and not let go until the final page.

1 thought on “Foxlowe By Eleanor Wasserberg”