CURRENTLY READING: The Shadow Land By Elizabeth Kostova, I’m on chapter 22 and loving it. Will review as soon as I’ve got to the end, wanting to find out what happens but also wanting it to last. In the meantime I just found this review I wrote last year (I think) for Netgalley. I loved this book and recommend this author. The Shadow Hour by Kate Riordan (the similarity in these titles is a complete coincidence except I remembered I wrote a review for this book). 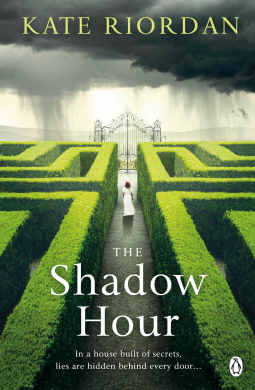 Mystery and secrets await Grace at Fenix House. Sent there by her grandmother who was once a governess there herself, Grace instantly finds holes in the stories her grandmother told her and is compelled to find out the truth.  The story is told from Grace’s viewpoint and dips into her grandmother’s viewpoint in the past to reveal the secrets and mysteries. The Shadow Hour is a riveting read, one of those novels you’ll find yourself reading late into the evening, promising yourself ‘one last chapter’.


Reminiscent of classic novels, (Jane Eyre is mentioned and the end is revealed) some scenes would not be out of place in a gothic novel. Each atmospheric scene is perfectly described without clichés and you are easily transported into Grace and Harriet’s world.  Tense, dramatic, surprising and emotional this story is perfect: great atmosphere, plenty of mystery to keep you reading until the last page. Can’t wait for the next book by Kate Riordan.

Although I have so many books to read and finish I just found a NEW book by my favourite author on Netgalley to read and review! I can’t contain my excitement.

The Shadow Land by Elizabeth Kostova

The author of my favourite book which I have read over and over: The Historian. She has only written two other books and I love The Swan Thieves too although I’ve only ever read it once. So I will finish reading the other book I have one chapter left but going to be reading this one asap. As in as soon as I’ve stopped typing!

Apocalypse unleashed, the Cleansing begins. Relentless. Survival, uncertain. Seven billion people inhabit this world, unaware our destruction is at hand. Death arrives unheralded—swift and nearly certain—not from meteors or nuclear holocaust or global warming, but from a source no one even knows exists. The architects of doom have moved among us, hidden in plain sight, waiting for the signal to trigger our extinction. Blindsided, humanity falls. A handful of survivors, bewildered and grief-stricken, must face the new reality, and quickly. For while the Cleansing threatens our existence, it is only the beginning. . . . https://www.amazon.co.uk/Cleansing-Earth-Haven-Book-ebook/dp/B00HFF7XFS/ref=sr_1_3?ie=UTF8&qid=1487190784&sr=8-3&keywords=sam+kates

Don’t usually read sci-fi but I was hooked straight away with this book. It begins with a lady sending an email, an email which will start the process of the apocalypse. The pacing of the story is perfect, it’s not a fast paced thriller, it’s even better. Not one moment of this book was boring, I enjoyed every moment of it.
We are introduced to various characters, witness horrible deaths and sadness. We see how a virus is spread throughout various parts of the world and how it affects all these people. We meet the people who have started the virus. I kept reading through all this desperate to know why this was happening?
The revelation is timed perfectly. The characters are brought to life effortlessly and you will love them (and hate some). It’s a compelling read reminiscent of the works of great authors like James Herbert and Stephen King. I loved the ideas in this book and think that this is a unique apocalypse story, a good mix of tension, action, conflict and human emotion.
Although this is part one of a trilogy it ends very well, although of course leaving the story open to be continued and I will definitely be continuing it. I loved the fact that this book is set partly in the UK and finally Wales gets a mention but then the author is from Wales.
I had an ebook copy of this book but it is also available in paperback.
February 2, 2017 jen_bookworm 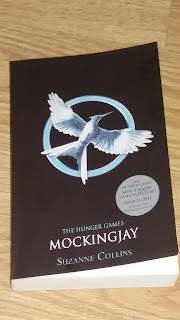 I started reading this series after watching the first film, there’s always that dilemma when there’s a new film based on a book. Should I watch the film first or read the book? So that’s why only now I’ve finished the final book in ‘The Hunger Games’ trilogy by Suzanne Collins. ‘Mockingjay’.
When I watched the film I was disapointed, (spoiler alert:) Katniss wasn’t involved in the fighting, well not really, there was no epic battle.
So I hoped the book wouldn’t be as disappointing and no it wasn’t. They say the book’s always better and it is because you are more involved with the character, in their head and following them. So because I knew what Katniss was thinking from the beginning, her concerns about who to trust for example I enjoyed it even though  she wasn’t active in the war towards the end. And now I think about it, I guess realistically she’s young and although most fiction writers love us to believe in children/teens that can save the world, in reality we all doubt this. So I guess this book is more realistic. It is!
I finished this book in about six days! I’m not bragging, this book was so hard to put down that I’d have a break and then pick it back up. I would have finished sooner if work or sleep didn’t have to intervene. I just don’t understand how nobody is still raving about Suzanne Collins. This book deals with dictators, the seriousness of war and poverty. It deals with grief and love and this is such a mature book it seems more of an insult to just call it YA and shelve it next to paranormal romances or chessey teen melodramas (no offence of course I did read Twilight, sorry I’m a vampire fan and always will be, always have been..).
Katniss is not sappy, she is a flawed, head strong woman who does not really want to be a hero. She’s someone that you probably won’t like. There’s so much I want to say about this book but I don’t want to spoil it if you haven’t read it. The end! Well, it explains the start of the war and then why the hunger games started and ties it up.
There is a lot of time with Katniss healing from injuries and she doesn’t get involved with the war really but she does fight in some places. Although there’s not a huge amount of action the pace is good and nothing is contrived, everything fits nicely. A twist in the end? At times this book hits you in the face with the horrors it shows and is there much of a reprieve from that? Not so much, no sappy happy story here but then I guess it’s more realistic that way.
Being first person we don’t really see much of the end of the war but then it is a change from films etc when action and big battles are the norm. Many people have criticise aspects of this book, certain people dying (I get) and the way it ends but i think this is because they are used to the predictable end when the hero does all the work and saves the day.  And we don’t want characters to die but then that’s what happens in life. This is not a plot led novel, this is a book about Katniss and that’s why I enjoyed it.
Maybe if we could see more of Peeta being with Katniss- sometimes she seems to completely forget about him which you wouldn’t do if you really loved someone! Sometimes! Maybe I’m being too harsh here,I really enjoyed this book, I’m thinking of the flaws and making the mistake of reading others comments.