I haven’t read a vampire book for a long time, there’s just so many that are the same these days. But  I seen this on Netgalley and I had to read it. 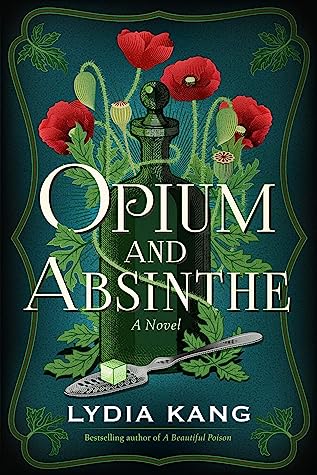 “New York City, 1899. Tillie Pembroke’s sister lies dead, her body drained of blood and with two puncture wounds on her neck. Bram Stoker’s new novel, Dracula, has just been published, and Tillie’s imagination leaps to the impossible: the murderer is a vampire. But it can’t be—can it?

A ravenous reader and researcher, Tillie has something of an addiction to truth, and she won’t rest until she unravels the mystery of her sister’s death. Unfortunately, Tillie’s addicted to more than just truth; to ease the pain from a recent injury, she’s taking more and more laudanum…and some in her immediate circle are happy to keep her well supplied.”

The first few pages of this novel drew me in and wouldn’t let go. I liked Tillie, she lives in a world where women are meant to go to parties, socialise and marry. But she spends the party in the host’s library. She has a passion for knowledge and enjoys reading the dictionary.

I had a brilliant first impression of this book, I loved the unique similes that the author used “her heart was quivering like a cold chicken jelly” and I was intrigued by the mystery. Tillie’s sister is murdered by what looks like a vampire and she’s determined to find out what happened, since nobody else seems to be bothered. Oddly.

Tillie’s  grandmother is a formidable lady, she is very harsh on Tillie and at one point refuses her to leave the house for her safety. Tillie feels trapped but not just in the house, in this life all planned out for her. Since her sister’s death they want her to  fit neatly into her sisters role. She tries to figure out what happened to her sister, meeting people who can help along the way.

The authors love of Dracula is shown by the quotes at the beginning of each chapter and the novel features in the story. So if you haven’t read it, expect spoilers. This was perfect: Tillie is reading the novel and asking questions, she researches the science behind vampires and tries to figure out if the killer is really a vampire. I don’t think I’ve ever read a vampire book or seen a film/series that looks at the science, that looks at how their teeth would have to be or how they could drink blood from two tiny holes, leaving only small puncture wounds. Very interesting and a refreshing change.

All the while I wonder if it’s really a vampire, or if someone she knows is to blame. I couldn’t figure it out, as the story progresses and Tillie tries to unravel the mystery, putting herself in danger and risking the anger of her family, I was riveted. And I didn’t guess the culprit in the end. But I enjoyed every moment of it.

It was interesting to read Tillie’s story, showing the attitudes to women during this time. And how she easily became addicted to opiates after an injury. Also her enthusiasm for writing made me remember myself when I getting into writing for the first time.

There is one glaring error in this book where the author keeps referring to the millennium being in 1900. Strange how this wasn’t corrected, not sure if it has been in the final proof as I read an ARC. But it didn’t spoil my enjoyment of the story.

I loved everything about this book: the facts, the story, the characters. It’s a riveting, historical mystery that you won’t be able to put down.

I’ve counted this in my 20 Books of Summer Reading Challenge, an update will be posted soon…. 🙂

1 thought on “Opium and Absinthe by Lydia Kang”